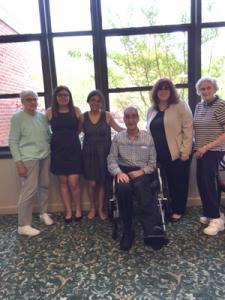 It was an eye opening experience for several residents at Atria Assisted Living in Huntington and students/alumni from Smithtown East and West High Schools as they shared personal stories about growing up more than 50 years ago versus today.

In honor of National Older Americans Month in May, Cona Elder Law, elder law firm based in Melville, believed that bringing the groups together to exchange their stories would foster better understanding between these generations ranging in age from 20 - 91.  And they were right.

Creating a comfortable and relaxed environment, Melissa Negrin-Wiener, Esq., Cona Elder Law partner, moderated the program.  As they sat across from each other at a large table, Melissa asked each group the same questions pertaining to dating experiences, employment, fashion, school, entertainment and more.

What was most amazing to the seniors and the students was how much they actually had in common with each other.   Katie Umana, a student at Suffolk Community College and graduate of Smithtown H.S., explained that she thought there would be more differences between them, but it turns out, they enjoy a lot of the same things like movies, dancing, dining out and more.

Both groups expressed how much they enjoyed the experience and the ease in disclosing personal stories with each other.  “It was so easy to speak to the young people,” said Barbara McLoughlin, 91.  “Even though we are considerably older, they trusted us enough to share their experiences.”

“It was cool to engage with an older generation,” said Sonia Melendez, a student at Adelphi University and graduate of Smithtown H.S. “Not only was it interesting to hear about what they did as teenagers, but knowing how the assisted living helps them connect with what’s happening today, such as seeing current movies like American Sniper, is great.”

In spite of similarities, there are differences in how they grew up.  A couple of women in their 90s weren’t allowed to date as we know it today.  Helen Sprance, 91, went out with one man who she later married.  Lynn Tonne, 88, couldn't date until she was 18.

Dinner and movies are common dates for the young people as they were in the past.  One change with today’s teens is the girls getting an official “prom-posal”, a creative invite from the young man.  Another interesting change in the digital age is the girls posting a picture of their dress on Facebook, which usually costs upward of $500, so no one else at their prom will wear the same one.

Education is different in many ways.  Today, it is customary for girls and boys go to college.  Alexis Papadopoulos, HS senior, is planning to be an anesthesiologist.  Rob Grasso, HS senior, wants to join the military and then study physics.  Most women didn't go beyond high school in the 1920’s and 30’s.  Instead of getting an education, many women spent time doing chores in the house, such as dishwashing and cooking.  It wasn’t unusual for them to make their own clothes.

If women worked outside the home, most held clerical and secretarial jobs.  Atria resident Lynn, 88, did tabulating at the former Williamsburg Savings Bank in Brooklyn.  Some babysat for 50 cents an hour.

According to Sonia, it’s important for both generations to be familiar with the past and present.  And the Story Swap is a great way to do that.   She also commented that the program reminds you of people you have in your life that you should speak to more often.  “I’m planning to call my grandparents after this.”

“Although the students gained a valuable amount of knowledge by speaking with our residents, the older generation also learned a great deal about the youngsters, and gained a greater understanding of their  concerns, hopes and dreams for the future and appreciation for making this world a better place to live,” said Sandy Brennan, Community Sales Director, Atria Huntington.

Since both groups got so much from the story swap experience, Cona Elder Law is planning to sponsor another one at another assisted living community in the Fall.

Cona Elder Law is recognized as a leading elder law and estate planning firm on Long Island.  The firm was ranked the #1 Elder Law firm by Long Island Business News for 4 consecutive years (2012 – 2015) and was a finalist in the 2015 HIA Business Achievement Awards.  The firm provides creative advocacy and cutting edge planning strategies and has been featured in many publications including: The New York Times, The Wall Street Journal, Newsday, L.I. Business News, Investor’s News Daily, USA Today, The Daily News, The New York Post, Kiplinger’s, Reader's Digest and many others.   Cona Elder Law attorneys have appeared as guests on WNBC-TV, WABC-TV, CNN-fn, News 12, WLNY News 55 and many radio stations including WOR, WCBS AM, WBAB and WFAN.

The Difference Between Elder Law and Estate Planning Attorneys